How does Lithium for depression work? Dosage, 17 side effects, and precautions

Maybe you might have just heard of using lithium for depression. Yes, research has proven its efficiency, but this article, explains how it works, the recommended Dosage, Side effects, and precautionary measures you must observe before taken lithium for bipolar treatment.

I know you would be surprised right now on how lithium, a metal can be used in the treatment of bipolar disorder or depression? Feel cool and read on to find out more.

Why lithium for depression!

More than 16 million people in America are impacted by depression each year. Over the decades, pharmaceutical lithium has been used to combat many mental health conditions like depression and bipolar disorder. Oral lithium (also known as lithium carbonate) is extracted from lithium, the natural resource. Lithium is found in nature and is known as the lightest metal.

The act of prescribing lithium has diminished as new prescription products reach the industry. That is not so much because of the efficacy of the medication. It is more related to the possible undesirable side effects associated with lithium.

How lithium works for the treatment of bipolar disorder. 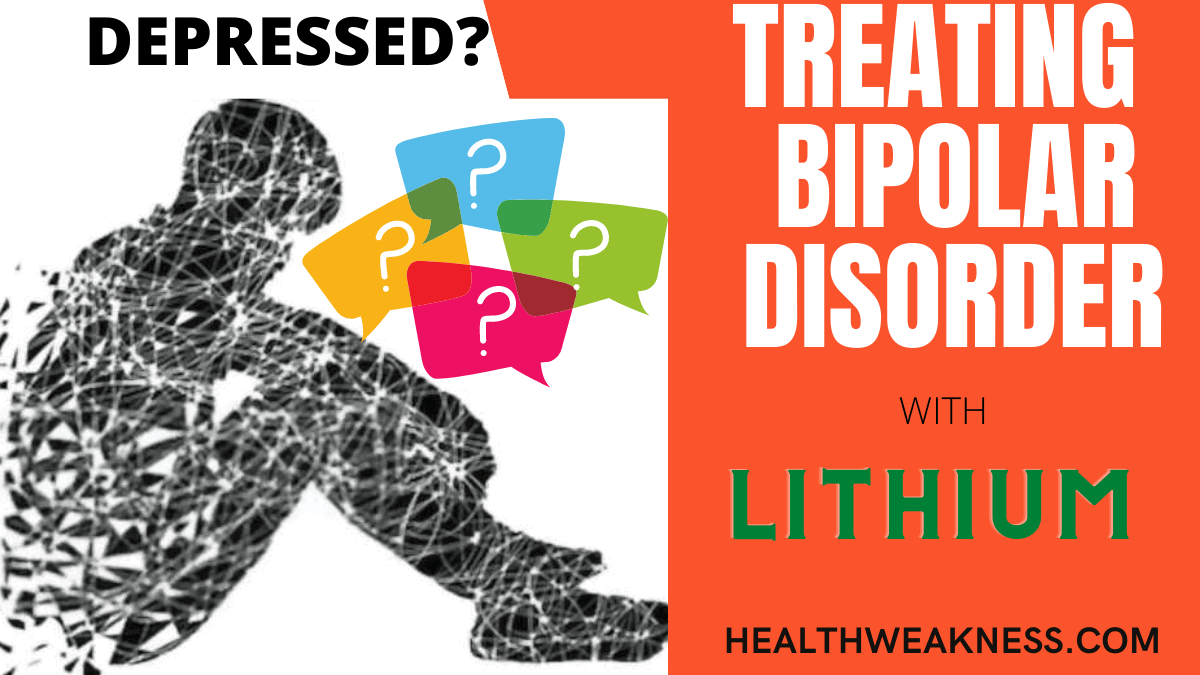 After more than 5 decades of clinical usage, how (and to what extent) lithium succeeds in treating the symptoms of bipolar disorder is still not entirely clear.

Lithium is particularly effective in treating bipolar disorder in the long term. That’s because it will reduce the number of manic episodes or suicidal thoughts a person would otherwise have with this disorder.

Doctors do know lithium works on the central nervous system. Lithium increases your brain’s quantity of certain chemicals which helps to balance your mood.

Some researchers believe that lithium tends to improve the brain’s nerve connections that regulate your state of mind because of the proteins it produces.

Lithium for depression, a proven treatment?

Lithium does have an excellent scientific track record as a successful bipolar depression treatment. In a systematic analysis, more than 300 trials in total found that lithium use in study participants effectively reduced suicide attempts and suicides. Because individuals with clinical depression and mood problems are 30 times more likely than those without to attempt suicide, the results of those research are essential.

The association between lithium and a reduced suicide rate for individuals with bipolar depression indicates it also suppresses certain signs of the disease. Researchers take these findings to be evidence that the mood-stabilizing effects of lithium are the reason why people taking it have fewer manic episodes and fewer suicidal thoughts.

Lithium is approved for only Bipolar Disorder-related Depression. It may also be successful when it is added to an antidepressant for other types of depression, but more studies are required.

Is lithium safe for everyone? These are precautionary measures you must observe before engaging lithium for depression

Lithium is safe when used under a doctor’s watchful eyes, and if you’re in a stable and steady environment that you can consistently take the medication.

Although lithium is a metal, and it is often used to make batteries for our gadgets, the lithium carbonate used in lithium drugs possesses a different ionic charge. The way your body absorbs sodium is the same way it absorbs lithium. Both metals are alkaline metals.

Lithium is not safe for children under 7 years of age, or for women who are pregnant or breastfeeding. Lithium also isn’t healthy if you have Brugada syndrome, which is a heart condition.

Lithium can interfere with quite a long list of drugs, including many psychotropic medicines. Discuss with your doctor any medications you are taking, including over-the-counter medicines and supplements.

Lithium dosage varies depending on your age, weight, and medical history. This medication should be taken carefully, and only according to specific instructions from your doctor.
The oral lithium is usually in capsules, a liquid solution and tablets for extended-release.

It may take several weeks when using lithium to manage bipolar depression, for it to begin to take effect. For a person, a standard dose of oral lithium for depression is 600–900 milligrams, administered two or three times a day.

The doctor will draw blood and check the lithium levels and shield you against side effects by making sure you don’t get too much medicine.

What are the side effects of taking lithium for the treatment of bipolar depression?

Nearly everyone taking lithium experiences side effects to some extent; although not all will experience all the side effects. If you are prescribed lithium, you’ll probably experience either the common or less common side effects outlined below:

13 Most Common Side effects of lithium

4 Less common side effects of lithium:

For people needing a long-term strategy to manage bipolar depression, lithium is prescribed. Oral lithium usage puts you at risk for severe side effects, making it less common than other treatment options.

But when used properly, lithium has also proved to be incredibly useful in treating the effects of bipolar depression, even if physicians don’t fully understand why.

Lithium poisoning (Both on Adults and Kids)

Even though research has it that lithium poisoning is very uncommon, but it can still occur. So when taking oral lithium, please follow the directions of your doctor.

FAQs (On Lithium for depression)

Who should not take lithium? SAFETY MEASURES

Lithium is not safe for children under 7 years of age, or for women who are pregnant or breastfeeding. Lithium also isn’t healthy if you have Brugada syndrome, which is a heart condition.

Though, lithium poisoning is uncommon, but it can occur

How does lithium work for depression?

Research proves that lithium works on the central nervous system. It increases your brain’s quantity of certain chemicals which helps to balance your mood and thus kicking off depression away from patient.

What are some of the side effects of lithium?

No Result
View All Result